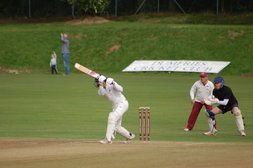 The final home match of a severely affected 2020 season went to a dramatic last ball finish.

At Dumfries Cricket Club the final home match of a severely affected 2020 season went to a dramatic last ball finish. A final ball boundary was hit for Galloway's Gatehouse midweek side to overcome James Hallam Youth in a Fosters Midweek T20 Cup Final carried over from last season.

For the Dumfries CC side, Adam Malik was the Stevenson McConnel Player of the Match.

The Nunholm midweek team, James Hallam Youth, opted to bat first and got off to a rapid start thanks to openers Adam Malik and Drew Dawson. Malik in particular got into his stride after a tight opening spell from Pat Druce. He and Dawson successfully took the score past fifty and when he retired for 40, having hit seven boundaries, the score was 67 in the 12th over.

Fergus Bainbridge added a sweetly struck cover drive for four in making 17 and Dawson was able to open his shoulders to also end with seven boundaries in his retired score of 41. However the Gatehouse bowling stayed resolute and a two wickets in two balls added to the batters' pressure to capitalise on the start and further extend the scoring rate. Tom McGrath claimed two wickets as the Nunholm side reached 121 for three dismissals at the end of the twenty overs.

Gatehouse also got off a good start with boundaries from Tom McGrath and Neil McGrath and were keeping up with the required run rate. The introduction of the spin of Vaughn Staples brought the first wicket when he bowled Tom McGrath in his first over. The other McGrath followed to another familial combination as Sam Thornely took a sensational hard-hit catch at extra cover off the bowling off son Sean. At half way, the 10 over mark, Gatehouse were 54 for 2.

However the innings which set up the opportunity to win followed for Gatehouse with Ross Lamb, batting at four, striking the ball well on his way to his retiral for 40 with the seeming default of seven boundaries.

That put the target within the well-known capabilites of finisher Pat Druce and the Youth bowlers were unable to apply just enough pressure. Sean Thornely took another wicket as did Callum Reynolds-Lewis but at the start of the last over eight runs were required to win. Then the scores were tied with one ball of the Nunholm season to go. A back foot four through extra cover from Druce emphatically sealed the victory for Gatehouse.

It was a suitably exciting game to finish a brief and restricted cricket season at Nunholm and many thanks to Galloway Cricket Club for providing the fixture.

The Stevenson McConnel Player of the Match for Dumfries was Adam Malik for his high strike rate in his retired score of 40 not out.