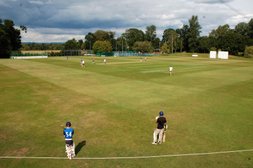 News about our Club Day on Sat 10th, evening sessions and the final results of the season.

Final League Games
The final West/WDCU league games of the season were at the weekend. The 1s had a successful end to the league season on Saturday with an 8 wicket win at Nunholm against Kelburne including a 5 wicket haul for Vaughn. Match report HERE.

Unfortunately the opposition for the re-arranged 2s game here on Sunday had late availability issues and had to cancel. An internal game took place on the ground instead.

The 1s jumped a place to finish 6th in the WDCU Premier League with Ferguslie taking the title after beating then first placed Prestwick. The 2s managed to take a creditable 5th place in the WDCU Second Division playing against mostly first XI sides.

And the midweek side, James Hallam Colts, played a final friendly last Thursday against the Health Pros with the 16 overs-a-side game just beating the evening dusk.

Final Evening Junior Sessions
After a couple of weeks when we were obliged to call off the Monday Juniors due to rain we had the first Monday evening this week since the local schools have gone back, and the coaches were really pleased to see that 38 Stars and Blasters were back for some more action on Monday. (It might have been more but they were all running around).

However our coaches are going to be taking a break for a while and NEXT WEEK will the last of the official summer evening junior sessons i.e. these are the Monday Stars and Blasters and the junior sessions on Tuesday and Thursday. Next Monday will also be the final W&G Soft Ball Cricket session on a Monday. But we hope to then see everyone at the Club Day next Saturday.

The Tuesday and Thursday evening senior sessions are at the discretion of those senior players who want to keep training.

Make sure you are registered on our website for future news about our indoor and winter programme.

Club Day and Club Awards - Saturday 10th September
The Club Day and Club Awards are to take place next Saturday, the 10th September. The format is for junior cricket in the morning, followed by a junior BBQ and then the Club Awards at 1pm. In the afternoon there is a T20 for those who have been playing some senior cricket (1s, 2s, Sunday, Women, Midweek) followed by a post match early evening BBQ for all and some end of season drinks.

The current plan is below. Club day matches are on the website to establish your availability and interest and we welcome any feedback for what is after all your Club Day.

Representative Cricket: Four of the Women's team, Orla Montgomery, Niamh Muir, Katy Anderson and Emma Fordyce represented the West as the Western Warriors Under-18s narrowly missed out on the Regional Trophy on Sunday. At the Finals day in Perth the West defeated the North but then lost agonisingly by one run against the East who won the 2022 series title.

And good luck to women's team players Lorna Jack and Hannah Rainey who are in the senior Scotland Women's squad for matches next week at the Grange in Edinburgh against Ireland Women on Mon/Tue/Thu, the 5th/6th/8th September. You can follow the side's progress in person at a game or online through Cricket Scotland.

PS Best wishes from the Club to Brocky and Rachel for their wedding day on Saturday!