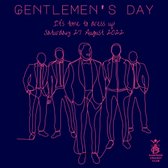 It is Gentlemen's Day on Saturday. It is time to dress up and get the togs on.

Gentlemen's Day on Saturday, 27th August
Time to pull out the chino's, blazers, and ties as Gentlemen's Day is this Saturday for the 1s home game to Kelburne, and with no Saturday game for the 2s (and aligned with Brocky's stag do) it should a good afternoon and evening.

Final League Games
The final West/WDCU league games of the season take place at the weekend, the 1s on Saturday and a change with the 2s playing on Sunday! Do drop in at the club if you can.

Summer Programme
The Dumfries Club's free summer schools holiday programme finished last week to complete the five weeks of the programme. The twenty sessions provided a variety of boys and girls aged 5 to 13 with a free first experience of cricket. The Club's evening junior sessions are continuing and with a Winter Programme in prospect.

Return of Trophies Please
With the summer season moving to a close our attention turns to the Annual Club Awards. We are aiming to hold a Club Day on Saturday the 10th September including friendly internal matches and a BBQ with the awards being presented at the end of the evening. More details will follow shortly.

If you received an award last year can you return your trophy to one of the following: a Team Manager, Coach or Captain or the bar staff at the Club. If these can be returned before 1 September then we have time to get the engraving completed in time for the awards ceremony.

As a reminder those 2021 season trophy winners can be found here www.dumfriescricketclub.com/news/our-club-award-winners-for-2021-2667742.html

Mondays - Intro to W&G Soft Ball Cricket
We are changing on Monday evenings and are running an Introduction to Soft Ball Cricket for Women and Girls. This is from 6-6:45pm, the same time as the CricHIIT sessions which have now stopped for the summer but still with Sue and Jo leading. If the soft ball cricket at Ladies Day got you interested then definitely come along.
See - www.dumfriescricketclub.com/calendar/training/session-1094979

Representative Cricket
In the final game of the U17 Celtic Cup last week in Northern Ireland, Scotland U17s levelled the series 2-2 against Ireland with a convincing 94 run victory in the final 50 over-a-side fixture. James (Hobman) played in all of the four games and contributed in this final win with a tight opening spell and returned to apply that pressure in the later stages as Scotland closed in on their win.

Congratulations to Women's team players Lorna Jack and Hannah Rainey who have been selected for the senior Scotland squad for matches at the Grange against an international Fairbreak team on Friday and Sunday and then the three match series against Ireland Women on Mon/Tue/Thu the 5th/6th/8th September.

Easyfundraising for the Juniors
We have just received another donation for our junior cricket from easyfundraising, of about about £20. Many thanks to our supporters who have raised that as part of their online shopping. You can too, see www.easyfundraising.org.uk/causes/dumfriescc/

This is for Sports Club membership and all other enquiries.