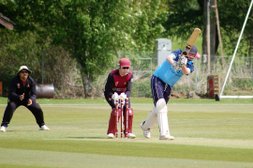 The 1s produced the headline grabbing performance of the West Premier League with a 62 run defeat of Ferguslie.

Dumfries produced the headline grabbing performance of the West Premier League on Saturday with a convincing 62 run defeat of one of the title favourites, Ferguslie. Alan Davidson was the Hole In The Wall Player of the Match with his top score at Nunholm of, aptly, 62 to help set a target to defend.

Photo: Alan Davidson top scored with 62 for Your Move Dumfries in their win over Ferguslie.

The Your Move Dumfries side managed to recover from a difficult start of two down for just three runs. Tom McBride and Jesse Smit started that before Smit was out caught behind for seventeen. Drew Dawson then supported McBride but he and then McBride were both out with the score in the eighties. McBride was caught at slip for an important innings of 43 runs. However Alan Davidson was in batting at number six but he lost more batting partners to leave the home side in a parlous position at 130 for 7.

Then came what proved to be a match winning partnership. Davidson and Uday Reddipalli batted astutely together to add a further sixty runs. Reddipalli tried to steer one too many and was caught for seventeen with Dumfries hoping for a final six over flourish. Davidson also succumbed bowled for an excellent knock of 62 which was punctuated with sweeps and drives for his ten boundaries. Dumfries were all out for 199 with a couple of overs left. Ghaffar with three and Daoud Tahir with four were the main Ferguslie wicket takers. It was a total for Dumfries to defend but behind where they would have ultimately hoped to reach.

It required a good Dumfries performance in the field and that was what the home side delivered. Tom McBride set the standard with a great low diving catch at point in Alan Davidson's first over. Bowlers were swapped as Ferguslie passed fifty and Jesse Smit returned and got the key wicket of Riyaad Henry as Chris Brockwell held on to a difficult skied back-peddling catch at deep mid-off. Smit bowled another key wicket, Omer Hussain, in his next over as Dumfries applied pressure. Tommy McGrath came on and brought more woes with keeper Bainbridge taking a catch in his first over. Smit got the fifth in the next, a great grab by Davidson at second slip, and Dawson held on a drilled catch at cover for McGrath's second. James Hobman got the seventh wicket and Ferguslie were rapidly reeling on 88 for 7.

Thanks to Ahmad batting at five the score edged passed the hundred but Chris Brockwell took two in two balls and then McGrath came back to bowl the stubborn Ahmad after a good innings of 34, for a 62 run win, with Ferguslie all out for 137 which lifted Your Move Dumfries to third place in the Premier League.

This Saturday, Your Move Dumfries play Clydesdale away in the Premier League and the second team are at home to Glasgow Accies.

Women's Cricket: The Scottish Women's Premier League starts this Sunday and the combined Dumfries, Galloway side play their opening league fixture against RH Corstorphine Women at Nunholm. The match starts at 1pm. The corresponding fixture last season resulted in a six wicket win for the local side and they will be aiming to start their 2022 league campaign in similar fashion at the weekend.

Junior Cricket: The Dumfries junior side produced a good all-round team effort at Lanercost Under-11s for their win on Sunday. All the batting pairs contributed for the Dumfries team to reach their total of 277 for only two dismissals. Cory Dawson and Jack Cyfert were the side's equal top scorers. Keyaan Carpenter and Archie Coltart each hit boundaries and not outs were registered by Gregor Martin, Daniel Wilcox-Homer, Macey Byers and Isaac Ishmael. All the bowlers then successfully defended that to win by 37 runs with five bowlers each taking a wicket, and with five run-outs in the field, plus the James Hallam Insurance Coach's Highlight was a great diving caught and bowled wicket by Keyaan on debut.