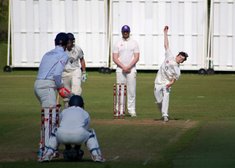 REPORT: Last over drama for the Saturday teams

Both Saturday teams had league games that arrived at the final over ...

The Dumfries teams on Saturday both had dramatic finishes as both the first and second teams had league games that arrived at the final over. However, both resulted in nail biting defeats despite the efforts of the McGowan Miller Players of the Match, Chris Brockwell and Max Corbett-Byers.

Your Move Dumfries played at Langside in Glasgow in the West Premier and the home side put the Dumfries side in to bat on what was an old-fashioned uncovered wicket. The Doonhamers had to battle hard for runs and a succession of batsmen made scores but not an innings defining one. Adam Malik, Jesse Smit and Alan Davidson all got into the twenties as the run rate hovered around three runs an over. Tommy McGrath provided a runs boost coming in with four overs left with a thirteen ball score of 22 not out to put Dumfries on 155 for 8 wickets after the 50 overs.

Keeping the run rate down and applying pressure was key for the Dumfries bowlers and Langside reached a similar position to Dumfries at 94 for 5 but with a few more overs left. However, batsman number 4, Khan, was making the difference as he neared his fifty. McGrath again struck late with two wickets and Langside then needed nine to win from sixteen balls with two wickets left. They managed to reach their target with an over to go to win by two wickets. In a game of small margins Chris Brockwell took three wickets and McGrath and Alan Davidson took two.

it was a similar finish for Dumfries 2nd XI, Nunholm, in their Second Division game at home against Hamilton Crescent. Nunholm batted first and reached 222 all out thanks to a ninety-run partnership between Max Corbett-Byers and James Little, with 37, to reach 142 for 2 at one stage. Max top scored with a good innings of 56 and lower order contributions reached the final total of 222 but with nearly four overs left unused.

Nunholm got off to a good start with opening bowlers John Woodhouse bowling both openers early and Callum Reynolds-Lewis taking another. Orla Montgomery took another wicket with a good gully catch by Reynolds-Lewis and James Cox followed with a further two, out lbw. However from 66 for 6 in the sixteenth over then followed the crucial partnership as opposition Captain Ross aided by a gritty innings by Richard Cox clawed the visitors back into the game.

Twenty overs later they were nearly a hundred runs on at 164 for 6 and looking favourites when Orla Montgomery returned to bowl Ross for 61. However Cox stayed and Anwar provided 32 rapid runs until Ronan Dunbar caught him well off a skier in the penultimate over. Eight balls left, six to win and one wicket left, but the visitors held on and won with four balls to go.

The Dumfries Sunday XI bowled well to take early Stainton wickets and to restrict their total to 144 all out at Nunholm in the Eden Valley Sunday League. Sean Thornely took three wickets, all bowled, Munro Cubbon hit the stumps thrice, two bowled plus a direct hit run out, and fellow juniors Billy Morgan and Jacob Holden each contributed a wicket.

However the home side batting failed to fire with only Max Corbett-Byers and Adam Malik approaching scores in the twenties. Junior Billy Morgan, after his bowling heroics last week, stuck in from the half-way point of 70 for 6 to a point when few blows might optimistically get close, but no with a final total of 113 all out but with Billy on 16 not out.

Junior Cricket: It was left to the Dumfries Under-11s to provide the win of the weekend with a good all-round performance away against the Penrith Gold side to do their team sponsor James Hallam Insurance proud. All bowlers bowled well to restrict the home side to their adjusted score 204 for 8 with Angus Pickstock starring with three wickets plus wickets for Cory Dawson, Sarah Cox, Gregor Martin and Isaac Ishmael. Then the batters reached a sizeable total of 276 in reply. Isaac hit 16 not out and Cory contributed 27 runs.

This Saturday, Your Move Dumfries play Ferguslie at home in the Premier League starting at 12 and the second team are away at Helensburgh.