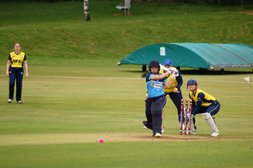 Weekend wins were reserved for Dumfries under-13s, the Sunday Development XI and the Women's team.

Dumfries 1sts had a let down after the previous week's victory over Ferguslie as they lost at Clydesdale in the West Premier League by eight wickets but the Women's side won their opening Scottish Premier League match beating RH Corstorphine by a similar margin of nine wickets.

Photo: Rosh powered her way to the Player of the Match award against RH Corstorphine.

The Your Move Dumfries first team never recovered from a difficult start which had three in the Clydesdale Clubhouse very early and that only got worse as they went six down and still under thirty. However two stands, from Alan Davidson and Sean Thornely, and then Davidson and Tommy McGrath, each out for 25, meant the last four wickets stretched the final total into three figures at 107 all out.

Barring a similar start from the home side that was not going to be enough and despite a catch by keeper Bainbridge in the third over off Smit, and a late wicket for Thornely, so it proved as Clydesdale reached a comfortable eight wicket win.

A very young Dumfries 2nd team, Nunholm, had a much closer encounter with Glasgow Accies in Division 2. There the Nunholm top order did not manage to break double figures against a tight bowling attack. Opener Mat Williams with 30 was the exception and got the side up to the hundred mark and then John Woodhouse and youngster Wahid on debut shared a seventh-wicket 44 run partnership. Wahid was unbeaten on 24 at the end as Nunholm were all out for 153.

Opening bowlers Callum Reynolds-Lewis and Woodhouse opened well to claim two and one wicket respectively, However Satpute and Shaikh revived the innings to the extent that the visitors were favourites as they reached a hundred exactly. Then in his returning over Woodhouse took three wickets including the dangerous Shaikh caught by Orla Montgomery at short third for 45.

Accies were now seven down and with over fifty to get. However despite striving Nunholm could not get the vital wickets, or not until Wahid, in his first over, bowled Zanjure for 23 but with just ten runs needed. Accies won by two wickets in a close contest and John Woodhouse was the Nith Valley Cleaning Player of the Match for his all-round efforts and with 4 wickets for 28.

The weekend wins were reserved for Dumfries under-13s, the Sunday Development XI and the Women's team.

Womens Cricket: At Nunholm, the combined Dumfries CC and Galloway CC women's team restricted RH Corstorphine to 96 for 8 in their thirty overs in their opening Women's Premier League fixture. Instrumental in that pressure was Roshini Prince-Navaratnam on debut who came on first change and spun her way to four wickets. Also on debut Hannah Marshall took three wickets and Niamh Muir neatly took out off stump for her wicket.

Prince-Navaratnam and Muir built on their bowling success with an opening partnership against the Edinburgh side. Muir was out caught attempting to hit over the top for 27 but Prince-Navaratnam completed an impressive Ashleigh Building Player of the Match performance by hitting a winning four to reach 53 not out.

Sunday Cricket: The Sunday XI appreciated their friendly encounter in the Eden Valley League against Carlisle. There they piled on the runs with Mat Williams retiring on 52 plus 21 from Adam Malik. Batting at four Fergus Bainbridge hit his way to a score of 40 and he was then supported by Scott Muir with 33 not out and Sean Thornely 30 not out.

Dumfries's 212 for 4 in the 36 overs was a challenging target but Carlisle set out on their chase. Junior Billy Morgan took the first wicket followed by a bowled by James Hobman. The required run rate was increasing and Captain Adam Malik came on to bowl late on and was able to successfully remove opener Egglestone for 82 and bowl Smith for 35 after their significant partnership. Malik went on take 5 wickets for 21 for the Nith Valley Player of the Match as Carlisle ended on 179 for 7, for a 33 run Dumfries victory.

Junior Cricket: Dumfries U13s won at Lanercost on Friday after setting a score of 103 for 4. Munro and Nairn Cubbon each hit not out 30s aided by 18 from Bill Middlemiss. All the bowlers bowled well to keep Lanercost to 72 for 7. Cory Dawson, Jack Cyfert, Billy Morgan and Munro Cubbon each took a wicket. Nairn Cubbon finished things off with two more and the Coach's James Hallam Insurance Highlight was the youngest player Angus Middlemiss coming on to bowl the final wicket.

This Saturday, Your Move Dumfries play Uddingston in the West Premier League at home and regional age-group cricket comes to Nunholm on Sunday with Western Warriors under-15s playing Eastern Knights under-15s from 11am.