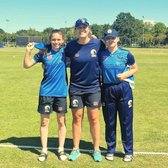 Last week was the knock-out three match qualifier for the World Cup for Scotland Under-19 Women in the Netherlands.

There they comprehensively defeated Netherlands U19s winning all three games. Local DG Women's team players Orla Montgomery and Niamh Muir were part of the winning team along with Rosy Ryan with the support staff.

The prize won is to compete in the first ever Women's U19 World Cup in South Africa next January as part of a 16 team tournament.

Their DG teammates this season Lorna Jack and Hannah Rainey have also been selected for the senior Scotland side for a three match series against Ireland Women at the start of September.