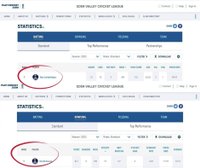 Top of the Stats

Max and Harith were both ranked #1 in the Sunday League's overall statistics.

Max and Harith were both ranked #1 in the Sunday League's overall statistics as the top ranked batter and bowler respectively. Well done both!

Max is the league's top run scorer, had the highest score and a batting average of 65.83 with three 50s, and one century. Although in the batting average rankings he was surpassed by red-inkers Callum, Mat and Sean!

Harith is number 1 ranked in the bowling with the most wickets (15) and a bowling average of 12.13. He was tied on the number of wickets with two others but we like the official rankings and Fergus was ranked next at 9th with 11 wickets.

Good to see the club's younger players developing through our Sunday Development side.