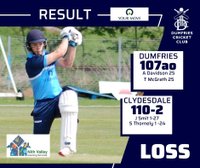 The first team were defeated by 8 wickets at Clydesdale

The first team were defeated by 8 wickets at Clydesdale after not being able to get enough runs in the first innings.

Dumfries 1sts had a let down after the previous week's victory over Ferguslie as they lost at Clydesdale in the West Premier League by eight wickets.

The Your Move Dumfries first team never recovered from a difficult start which had three in the Clydesdale Clubhouse very early and that only got worse as they went six down and still under thirty. However two stands, from Alan Davidson and Sean Thornely, and then Davidson and Tommy McGrath, each out for 25, meant the last four wickets stretched the final total into three figures at 107 all out.

Barring a similar start from the home side that was not going to be enough and despite a catch by keeper Bainbridge in the third over off Smit, and a late wicket for Thornely, so it proved as Clydesdale reached a comfortable eight wicket win.