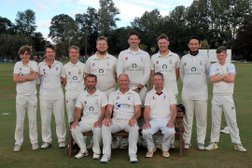 Seconds win at Shawholm for an early away win.

Nunholm, Dumfries 2nds, travelled to Glasgow in the Premier Reserve League and came away with maximum points as they showed their class with the ball, bowling out Shawholm for 58, and then knocked off the total for the loss of just 3 wickets.

Shawholm asked Nunholm to bowl first with the matchball sponsored by GM Thomson and what a start it was as Stuart Alexander maintained his great form by getting a ball to nip in and dismiss the opening batsman. Jacob Taylor was also getting movement from the other end and dismissed the other opener LBW before an enforced break due to rain. Nunholm returned after the break in the same form. Alexander picked up two more wickets as did Taylor and Shawholm found themselves 6 down with just 40 runs on the board. A bowling change for Nunholm saw Sam Thornely and James Cox enter the attack and the pressure continued to force the Shawholm batters into errors, and each bowler picked up two wickets apiece to leave Shawholm out for just 58. They say catches win matches and Nunholm took all their chances with Andrew Reed taking three and Sean Thornely two.

Nunholm's reply got off to a bad start as confusion between the openers Gurupal Singh and Mat Williams left Williams stranded in the middle and easily runout. Jeremy Goodin looked in fine form as he and Singh knocked the ball about and after Goodin hit a few boundaries the nerves began to disappear for Nunholm. Singh chipped the ball to mid wicket and Reed came in to partner Goodin and this partnership took the team to fourteen runs short of the total before Reed also chipped to mid wicket. Goodin guided the ball for another boundary to top score with 22 not out to claim the early victory.

Hole in the Wall Player of the Match: Stuart Alexander .

Nunholm move up to 3rd in the league which is great for the newly promoted side.