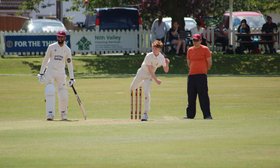 Nunholm lost to leaders Partick in a high scoring game on Saturday.

Partick settle their score with Nunholm

Even with some last minute team changes expectations were high with Nunholm, Dumfries 2nds, the only team to beat Partick so far in the Premier Reserve League this year. However league leaders Partick got some revenge with an imposing win in a high scoring game at Nunholm.

Partick won the toss, which proved to be a key moment in the day, batted and the opening ball of the day, sponsored by Horizon Conservatories, was promptly smashed back over bowler Reynolds-Lewis for 4. The opening barrage continued from both opening bats, J. Mills punished anything full and R. Corner put away any short balls from the opening bowlers, Reynolds-Lewis and Cox.

A change of bowling did bring back some control with Jerry Goodin bowling well but with no initial reward. The first breakthrough was not until after 20th over, when Goodin bowled Mills for a very rapid score of 103.

With a large total already in the making it allowed Captain Cox to get the Juniors some bowling experience with first Luke McBurnie and then Matthew McBurnie bowling, and he picked up a wicket with his first ball caught at midwicket. Goodin continued to bowl with good control and picked up another wicket to finish with 2 for 67 off ten overs. Vaughn Staples was the next to bowl his leg spin in his debut match for the 2nds. After a nervous and expensive first open, he relaxed and then bowled with great control and maturity. He trapped Hussain LBW for 20 in a maiden over and finished up with an impressive 7 overs 1 wicket for 46. With some further punishment for Cox at the end of the innings, who bounced out Corner for 142, Partick finished on an imposing 358 for 6.

It was important that Nunholm did not lose early wickets to ensure an competitive innings was built. Openers Williams and Singh started well with some wayward bowling allowing the total to reach 36 after ten overs. Singh (16) was caught by a diving catch in the covers after a change of bowling. The middle order also contributed with scores to keep up a reasonable scoring rate. Mat Williams continued to accumulate runs while some wickets fell at the other end. That brought James Cox to the crease at 150 for 5 with the intent of pushing the target on towards 200. Cox hit 28 not out playing his shots, although not always connecting, and Williams was moving his way to fifty until he was bowled by Singh for 40 in the 44th over.

Nunholm finished on 195 for 8 after the 50 overs which was a good team effort after a long day in the field.

With three juniors in the team it was a good experience for them for future games and one of them, Vaughn Staples, provided the Performance of the Match with his debut spell of spin bowling. On Saturday Nunholm travel to Prestwick for their next fixture.