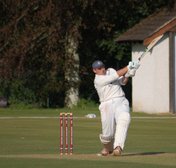 With 22 players unavailable it was a great club effort that at 9am Nunholm even had a 12th man, however by 9.30am the team were leaving with 10 but in good spirits. It would be a day for individual goals and experiences with five juniors in the team.
Captain Cox was relieved to be greeted by an umpire at the toss and Andrew Reed was also very relieved when Cox won the toss and elected to bat.
Openers Williams and Cox batted with control and were very watchful early on. Runs started to flow with Cox putting away the bad ball, it was looking like a score of 120 plus was achievable until Cox tried one shot too many and was caught behind for 25 off the bowling of C Turner with the score 29 for 1 after 11 overs. It was a challenging wicket to bat on with some balls 'popping' while others kept low. Wickets continued to fall from the other end with no one making double figures, Mat Williams was the constant and continued to dig in and provide some resistance. F Rao's off spin was the undoing of the juniors, it was an experience which they will learn from. Mat Williams carried his bat finishing up with 19 not out with useful 19 run partnership for the last wicket with Luke McBurnie (4) who was unfortunate to be bowled. Nunholm finished on 79 of 33 overs.
Although it was not a lot of runs it gave the team an opportunity to make it challenging for St Ninans if early wickets fell. With another new opening bowling combination of Cox and Reed it was hoped this would be the case. It was, with Reed striking in his second over getting D Thayne LBW for 2 a ball which hit him on the full with a late swinging delivery. Cox decided to go for the full and straight plan and bowled M Morrison for 12 who was looking to up the run rate. He then struck again getting the useful left hander and fellow captain R Kennedy caught behind by Williams for 13, at this point St Ninans were 29 for 3 and were looking nervous. Unfortunately there were no more wickets to fall until the score was on 71 when Vaughn Staples bowled J Morrison to secure a well earner bonus point for Nunholm. St Ninians continued to attack and were able to knock off the final few runs to gain the victory.
With a positive team talk at the end from Andrew Reed the team left in good spirits with a realisation from the juniors that they can compete in this level which bodes well for the future. Nunholm are at home to Titwood next Saturday and are looking to get back to winning ways.
The Andrew Dawson Horticulture Man of the Match was James Cox