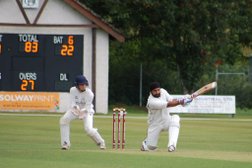 Failure to bat the 50 overs costs Nunholm at Home

Nunholm found runs at a premium at Dumfries Sports Club as Titwood ran out comfortable winners. After the significant overnight rain there was an early call from Captain Cox to attend the ground for preparation works, the team worked well and the game was only delayed by 30 minutes.

Unfortunately this level of team work and determination did not show up in the team’s batting performance. On a wicket which needed players to get themselves in and work to get the runs too many of the senior players gave away their wickets. After being 17 for 3 Andrew Reed (34) and Gurupal Singh (35) dug in and formed a good partnership, making the opposition think with some counter hitting. Unfortunately after Reed fell with a leading edge to short fine leg the only other resistance came from James Little, he played some nice drives and was resolute in his defense something which the more senior players could learn from. James was the last player out for 15, with Nunholm finishing on 119 and only using 39.4 overs.

Defending 120 Nunholm needed to restrict Titwood and take early wickets, with Jacob Taylor struggling to find his line Titwood got off to a solid start. Jeremy Goodin was testing the openers A Farid and B Esakhiel but with no success altough he did have Farid dropped on 10. The left handed Farid was the aggressor of the two openers and was finding the boundary with ease and he quickly went to 50 within 10 overs. A change of bowlers was required with Orla Montgomery replacing Jacob Taylor from the Railway End. Orla was bowling with good pace and moving the ball both ways, she got the dangerous Farid caught at mid on by Campbell Potts for 67. By this time the damage was already done however spinner Vaughn Staples bowled with good control at the end of the innings.

Nunholm have another home game next Saturday against Bothwell and require a win to move them back up the table.