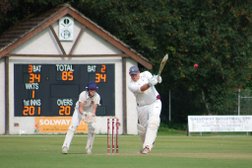 It was a run fest for Nunholm as they put in a performance which got them the win they deserved with everybody in the team contributing. The watching crowd were given a great match to watch with over 400 runs scored and 12 wickets taken.

The toss was won by Meikleriggs and they elected to bat and with 2 out of the top 5 leading run scorers in the league it was vital Nunholm bowlers started well. Both opening bowlers Alexander and Taylor bowled good areas and Meikleriggs were two down after Alexander bowling both openers including ex-Dumfries player Davie 'Dickie' Sturgeon. With Meikleriggs 23 for 2 Nunholm were in control, however with some persistence from both Hasan Khan (31) and Uzair Ahmad (30) Meikleriggs consolidated and saw off Jacob Taylor who bowled 10 overs straight through for just 30 runs.

Jeremy Goodin replaced Jacob and he quickly found the right pace to bowl his leg spin, quickly removing Ahmad for 31 a sharp catch by Andrew Reed at first slip and then he bowled Khan for 31. Goodin was often unplayable and Meikleriggs decided to see him off, as he finished with 10 overs 2 wickets for 22. At the other end Callum Reynolds-Lewis and Orla Montgomery were both used but were unsuccessful, Sean Thornely came into the attack and with his outswing made it difficult for the batsmen. Sean picked up batsmen 6, 7 and 8 cheaply but Brian Shaw continued to score freely especially taking to Vaughn Staples hitting him for two big sixes. Vaughn did have the last laugh having Shaw caught behind by Williams for 54. Callum Reynolds-Lewis picked up the ninth wicket by a smart catch from Sean Thornely and Alexander came back on to take the last wicket to bowl out Meikleriggs for 201 in 46.4 overs. Overall it was a good team bowling performance with overs for the junior players as well as senior members playing a controlling role.

Chasing 202 to win the Nunholm batsmen needed to occupy the cease and were aware the runs would come but recent batting displays had seen middle order collapses. Mat Williams and Captain James Cox opened the batting. At first it was slow going with Shahzad Ahmad bowling a challenging outside off stump line and Craig Glassford left arm seam awkward to get away. Runs started to come with Cox playing two cover drives in 2 balls and after a couple of high scoring overs the score moved on to 30 off 9 overs. In the next over Williams was caught on the cease and was out LBW to Glassford. Andrew Reed was pushed up to number 3 from his preferred number 4 (Ed: Nunholm’s Root). He quickly got up and running in his usual range of back foot shots. Runs started to flow and quickly both batsmen were into the 30's matching each other’s shots and run scoring. Meikleriggs were changing their bowlers to try and break the growing partnership but by this time Cox and Reed were 'IN' taking easy singles and two's, along with putting away the bad ball. Reed reached his 50 first from the 1st ball of the 26th over and was followed by Cox getting his 50 in the next over. Reed finally fell for 71 coming down the wicket to Mahaptra and chipping it to point. The score was now 173 for 2 with 36 overs completed. Nunholm needed 29 runs from 14 overs. Junior James Hobman was next in, he batted with much maturity providing an excellent partner to Cox including hitting a couple of lofted on-drives. However it was fitting Captain Cox hit the winning run from the first ball of the 42nd over to finish 86 not out.

It was a great day for Nunholm with performances across the team to achieve the much needed victory and move them into the safety of mid-table. Nunholm were promoted to the division last year and look on course to achieve their season’s aim of survival in the Premier Reserve Division.

Man of the match: James Cox