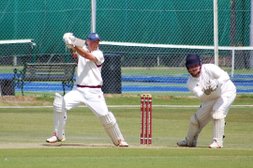 Dumfries 2nd XI played their first home match of the delayed season in the league but were unable to stem the Titwood batting line-up.

On Saturday Dumfries 2nd XI, Nunholm, played their first home league match of the delayed season in the Western Premier Reserve league but were unable to stem the Titwood batting line-up.

Nunholm batted first after winning the toss and then promptly lost two quick wickets bowled. It required skipper Andy Reed and number four, Jerry Goodin, to ease concerns about a short day and provide the first partnership of the innings.

Reed went caught for 15, and another middle order wicket fell, but it was Goodin that was batting really well and effectively to provide the bulk of the runs. He found another partner in Cameron Telfer and took the score on to 123 for 4.

Just when the sages were looking at the scoreboard and considering that Goodin was batting well enough for a three figure score he attempted to clear deep mid-off, and didn't. He was out caught for the top score of 66.

Again there was the chance that the innings could subside but first Telfer swept his way to 19 and then, in particular, Nunholm found a last wicket partnership thanks to Tom Woodhouse and Sean Thornely.

Once youngster Thornely, batting with a runner for the first time due to injury, had worked out roughly where to stand he unfurled a glorious series of off drive. Woodhouse contrastingly favoured the on-side and duly succeeded with a couple of sixes. He was bowled for 27 and Thornely was not out 16 in a final total of 203 all out.

That meant Nunholm could do with early wickets and they were unlucky as Woodhouse and Stuart Alexander bowled well to repeatedly beat the bat, interspersed with the ones that did not going for four.

Only a run-out mix-up, exploited by fielder Max Corbett-Byers, removed one opener but the other one, left-hander Farid, was looking more comfortable. Hussain and Telfer were tried as bowlers but Farid had found an aggressive partner in Ameed batting at three with both aiming at the shorter boundary as the run rate went up.

The spin of Goodin provided two wickets. Farid fell to sharp slip catch by Thornely for 82 and Ameen was coolly stumped by keeper Fergus Bainbridge for 53 but Titwood eventually cantered to a three wicket win.

The Bob Murray Player of the Match was Jerry Goodin for his top score, added to by two wickets, and the side play again at home on Saturday in the league.