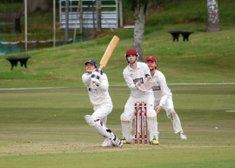 Nunholm played Partick at home when a useful batting effort was successfully chased by West of Scotland visitors.

Nunholm, Dumfries 2nd XI, played Partick at home in the Premier Reserve League on Saturday in a match sponsored by Solway Print when a useful batting effort was successfully chased by the visitors from the West of Scotland club.

Nunholm lost an early wicket, one of four victims to the bowling of Ross Wilson, and thereafter the innings progressed in useful but not substantial enough partnerships. Firstly with Andy Reed and Cameron Telfer before Reed was caught for 21. Jerry Goodin came in batting at four and continued his good form. Telfer became the first of four batters who were out in the teens, as did Max Corbett-Byers. When Goodin fell caught and bowled for another score, 36, the Nunholm side had reached six wickets down and with the innings beyond three figures but in danger of wilting.

Ronan Dunbar and Orla Montgomery thought attack was the best option. Montgomery was caught in the teens and John Woodhouse continued in the same vein but Dunbar was on a roll smiting several boundaries. He was then cunningly stumped for a vibrant 29 and Woodhouse was stranded, run out, also in the teens. The final Nunholm total was a useful 182 but with eight overs left.

The Partick skipper and opener was then rapidly removed by Stuart Alexander, lbw. After progressing well to 31, Malik was also dismissed lbw for Woodhouse's first wicket for the Nunholm side. Hyder Hussain got Jacobson to play on for three down but Farr was in at four and was to produce the innings that settled the match as he punished anything short and exploited the shorter boundary. He took the score swiftly on, partnered by Farndale, until he tried to hit Telfer high over square leg only to be very well caught by Dunbar with remarkable insouciance on the boundary for the top score of 67.

Thereafter the die was cast and Farndale and the hirsute Etheridge took their side on to a comfortable six wicket win. Nevertheless it was a solid collective performance from the Nunholm side with seven players into double figures, but without the big innings to challenge an experienced Partick batting line-up, and a single figure number of wides demonstrated the bowlers were on the right line and made Partick work for their runs.

Although without a stand-out performance the Solway Print Dumfries Player of the Match went to Ronan Dunbar for ensuring a reasonable total, and for demonstrating his potential with his boundary hitting, and for his nonchalant boundary catch and general fielding display.

Nunholm next play away at Kelburne in the league on Saturday.