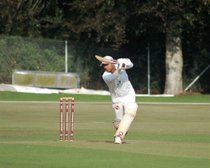 Nunholm batted with resolve to beat Whitehaugh in the Western Premier Reserve League on Saturday.

The Dumfries second team, Nunholm, batted with resolve to beat Whitehaugh in the Western Premier Reserve League on Saturday and Uday Redipalli was the Solway Insulation Player of the Match on his debut.

Whitehaugh batted first and Sean Thornely struck first by comprehensively bowling one opener in his second over. However it was twenty overs more until the next wicket fell when junior Harith Hassan took a wicket, also on his debut, trapping Gilmour lbw for 22, 62 for 2.
The batting pair of Allan and Khan then proved hard to shift and they also accelerated the scoring. With seven overs left Allan was bowled by Muir for 80. Hyder Hussain returned with an lbw first ball to remove Shah for 67 but a final flourish of 20 from Milliken looked significant as Whitehaugh pushed on to a testing target of 224 for 4 after 50 overs.

Nunholm started briskly and smartly exploited the gaps in the field and passed fifty before the ten over mark but wickets were given away rather than earned and the scoreboard soon read 94 for 5 in the twentieth over. Max Corbett-Byers was looking good for his 23 until caught at midwicket and opener Mat Williams contributed a valuable 32.

That brought together the key Nunholm pairing of Uday Redipalli and Sean Thornely. They put on a partnership of nearly eighty with Redipalli finding the boundary on a regular basis. The required rate was being well managed at four an over when Thornely edged a drive, out for 21.

James Cox then played a Captain's knock supporting Redipalli. Nunholm found they had overs to spare as Redipalli added a big six to reach 74 not out and then Cox finished off the game with two successive boundaries for a good Nunholm win by four wickets.