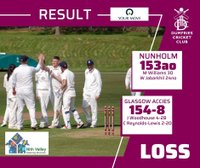 A tense finish at Nunholm saw the 2s lose by 2 wickets.

A tense finish at Nunholm saw the 2s lose by 2 wickets.

A very young Dumfries 2nd team, Nunholm, had a close encounter with Glasgow Accies in Division 2. There the Nunholm top order did not manage to break double figures against a tight bowling attack. Opener Mat Williams with 30 was the exception and got the side up to the hundred mark and then John Woodhouse and youngster Wahid on debut shared a seventh-wicket 44 run partnership. Wahid was unbeaten on 24 at the end as Nunholm were all out for 153.

Opening bowlers Callum Reynolds-Lewis and Woodhouse opened well to claim two and one wicket respectively, However Satpute and Shaikh revived the innings to the extent that the visitors were favourites as they reached a hundred exactly. Then in his returning over Woodhouse took three wickets including the dangerous Shaikh caught by Orla Montgomery at short third for 45.

Accies were now seven down and with over fifty to get. However despite striving Nunholm could not get the vital wickets, or not until Wahid, in his first over, bowled Zanjure for 23 but with just ten runs needed. Accies won by two wickets in a close contest and John Woodhouse was the Nith Valley Cleaning Player of the Match for his all-round efforts and with 4 wickets for 28.