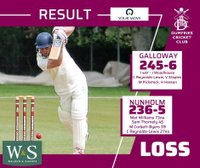 The 2s had a close derby defeat to Galloway in the Second Division.

In the West Second Division Nunholm hosted Galloway in a local derby encounter. The Gatehouse side batted first and they succeeded in setting a challenging total of 245 for 6 with Steven Carr hitting 61, Ross Lamb 50, and Pat Druce contributed 35. Wickets were shared with Matt Pickstock picking up a caught and bowled on his debut and also one each for John Woodhouse, Callum Reynolds-Lewis, Vaughn Staples and Harith Hassan.

Nunholm managed a century start thanks to openers Mat Williams and Sam Thornely. Thornely was out for 45 and Max Corbett-Byers then boosted the run rate as he hit a rapid 39. Number seven Callum Reynolds-Lewis also provided impetus with 27 not out but Nunholm started to rue missed opportunities when they finished ten runs short of a dramatic win on 236 for 5. Walker and Sharpe Player of the Match Mat Williams finished undefeated on 73 not out. Ross Lamb followed his runs with two wickets and Anthony Hulatt got one plus a run out.