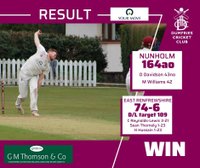 2s move up to fourth with Saturday win

Nunholm, Dumfries 2nds, moved up to fourth spot in the Second Division with a rain affected win against East Renfrewshire at home on Saturday.

Batting first the home side owed their final total to the experience of Mat Williams opening and David Davidson batting lower down the order. Williams was out caught for 42 having steered the side to 114 for 6 with wickets falling at the other end. Evergreen Davidson then ensured a target to defend with a swift not out score of 43 with seven boundaries, including two sixes.

Nunholm totalled 164 all out and after rain interruptions the target for East Renfrewshire was reduced to 109 in 23 overs. Callum Reynolds-Lewis was the GM Thomson Player of the Match as his wickets then stalled the opposition progress. He dismisssed the top three cheaply, ran out number four, and held a catch for the last wicket to fall to contribute to five of the six wickets dismissed in a East Renfrewshire total of 74 for 6 for a 35 run win by Nunholm.