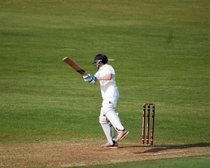 Top Team Effort at The Priory

Dumfries under 13s started their season with a solid all-round performance against a good Lanercost side.

Asked to bat first they recovered from 12 for 2 against impressive opening bowling by not losing another wicket until the "ton was up". Both Munro and Nairn achieved their retiral targets and Bill Middlemiss was the constant - selflessly out off the last ball going for the big one!

Lanercost also lost an early wicket but looked just as dangerous as the Dumfries batting. The Nunholm side however showed great character. Munro Cubbon and Cory Dawson kept it tight early; Billy Morgan kept his cool under pressure to bowl their danger player, Alban; Jack Cyfert, on debut, bowled with good rhythm and clean bowled the well-set Jones; Nairn Munro was on a hat-trick when Bill Middlemiss took a good catch behind the stumps and pressure from the excellent fielding allowed the champagne moment of the evening - 9-year-old Angus Middlemiss came on to claim a wicket and have figures of 1 for 3 from 2 overs.

There was no player of the match. It was the overall performance - from debutants to experienced players all doing their bit. The debutants looked comfortable standing up to hostile bowling and going for hard hit balls in the field, the general fielding was tidy, the running between the wickets was excellent, the batting positive but correct against good bowling and the bowling was accurate giving little away including extras.

The effort was encapsulated in the moment of the run-out. Instead of being down from dropping a catch the bails were off in a flash due to a Cubbon/Middlemiss combination.