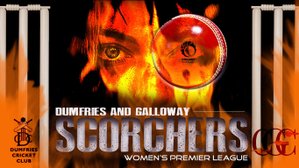 Woman in White does for Wests

A sprinkling of rain greeted the travelling team from StewartsMellville/ Edinburgh South as they arrived at Dumfries Cricket Club Nunholm but the ground staff had prepared a good wicket and play was not delayed.

West allsorts saw women and girls from Galloway CC, Stirling CCC & Glasgow Uni joining the Dumfries Cricket Club home players of Katy Anderson, Orla Montgomery, and Sue Strachan but they were missing some key players including captain Charlotte Dalton who had been called up to play for in the Scotland Wildcats A vs Durham. Ed.Sth/StewMel were mostly a young team but led by ex Scotland International all-rounder Katherine White and Tasmanian state player Hannah Short and it was always going to be a tough ask for West.

West won the toss and put the Edinburgh side in to bat. Katherine White was the pick of the batsmen with 96 not out supported by young players and then in the last couple of overs by Short when they showed their experience and ability and racked up a big score of 183.

Pick of the West bowlers was Galloway’s Nat Hamblin with 2 wickets and the West fielding is improving with each game despite a couple of missed wicket chances.Young D&G bowlers Katy, Orla and Jess McCulloch impressed with their accuracy and a strong future is predicted for them! Stirling’s Erin Leslie bowled very steadily too. Pick of the fielders was Sorcha Breslin for GU whose long accurate throwing from the boundary was exemplary. White gave no chances for wicketkeeper Katherine Berrill but she made some athletic stops which saved the total being even higher.

West knew they needed to score over 6 runs an over- a steep task against a side with 3 internationals but the openers Jess and Nat set about their task with determination. Nat went on to score her best ever 51 and Jess was going well at 31 when indecision from Strachan at the other end caused her to be run out.

By this time the runs required were more than 1 per ball so Strachan had to have a go but unfortunately she holed out for just 10 to the best fielder on the park, Short at midwicke, in trying to find the boundary off the bowling of White.

Orla Montgomery showed good variety of shots and great technique finishing 21 not out but West ran out of overs and fell 37 runs short. A good game well contested and played in great spirit but a win for the Edinburgh team.