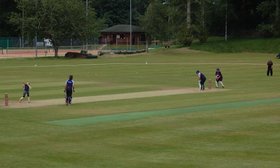 Dumfries CC/Galloway CC Women played their first home league match of the season at Nunholm on Saturday but were defeated by Premier League leaders Edinburgh South CC/Stewarts Melville CC with two experienced players taking the game away from the home side.

Skipper Rosy Ryan asked the visitors to bat first and White and Holland put together an efficient opening partnership with any loose deliveries successfully dispatched over the boundary. Natalie Hamblin made the breakthrough with a good delivery bowling Holland for 36 to prevent a century opening partnership. She then was on target again with a direct hit run out to take the second wicket. However that brought Hannah Short to the wicket to join Kathryn White with the score on 135 for 2 after 23 overs and with 7 overs to go.

With the capabilities of ex-Scotland stalwart White and Australian state batter Short the home side knew they wanted one wicket to get a new player to the crease. That was a long shot and the innings was duly jolted by some Short-White expresso shot making as Short in particular upped the scoring rate to add nearly ninety in the remaining overs to reach a total of 224 for 2 after 30 overs.

The bowlers, fielders, and debut wicketkeeper Julie McCulloch, stuck to their task well with a main bowling attack of Rosy Ryan, Jess McCulloch, Orla Montgomery, and Natalie Hamblin and they were aided by Jo Williams, Louise Cumbley and eleven year Jasmine McCulloch who also got the opportunity to bowl to a Scotland batter.

The target had been converted into a distant one in the closing overs but Orla Montgomery, batting at three, also repeatedly found the boundary as she rapidly hit eight 4's in a 24 ball score of 38 until bowled by the dreaded low delivery. Jess McCulloch and Natalie Hamblin then batted well to provide an eighty run fifth wicket partnership until the former was dismissed for the innings’ top score of 43 and with just two balls remaining. The young bowling attack from the visitors bowled determinedly and Lowry and Holland each picked up two wickets.

The reply of 146 for 5 was a commendable response to a very big total and the Ashleigh Building Player of the Match on the day was Natalie Hamblin for an all-round performance with a wicket bowled, a direct hit run-out and a not-out score of 24 in the biggest partnership.