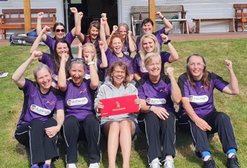 The combined DumfriesCC/GallowayCC side beat West of Scotland by 9 wickets in their Premier League match at Gatehouse.

On Sunday the combined DumfriesCC/GallowayCC Women’s side played an unbeaten West of Scotland team in their home Premier League match. The result went the way of the home side as they finished up winners by nine wickets.

On a perfect day for cricket at Gatehouse the West of Scotland Captain Sophie Trickett won the toss and decided to bat. West had not lost a match yet in the league but both teams were depleted by the absence of their regional players plus the usual holiday season so it was all to play for.

The young West openers managed 14 off the first three overs despite some good opening bowling from Galloway’s Jess McCulloch who managed to get pace and a bit of swing and Louise Cumbley who was going for accuracy. Cumbley struck in the 4th over finding the edge of Trickett with keeper Sue Strachan taking a low catch behind the wicket. Again Jess put the batters under pressure with good line and length and then bowling partner Louise struck again bowling Faisal for just 2 runs.

Niamh Muir was brought on as first change and in the tenth over she bowled the promising looking Fatima Gardee for 12. With Muir and Jo Williams doing a great job of keeping the batters under pressure and some tight fielding from the rest of the team, the next 3 wickets fell with 2 catches held by Hamblin and Muir and then an unfortunate hit wicket dismissal had West of Scotland struggling on 65 for 5. More West wickets fell including a good run out and then Jess McCulloch took the last with an edge caught behind again by Strachan and the visiting team were all out for 73. The fielder of the day was young Jasmine McCulloch who helped keep the total down. Pick of the bowlers was Jo Williams with 5 overs bowled, 2 wickets for only 18 runs and Muir (2), Cumbley (2) and Jess McCulloch also took wickets.

The home side’s opening batters, Jess McCulloch and Natalie Hamblin, set off the run chase being careful but positive and by the end of the sixth over the score was 27 for no loss. Jess McCulloch fell to a close LBW decision for 19 runs but with Niamh Muir joining Nat in the middle they rotated the strike well and took only 16 overs to chase down the target without any further loss and get a good win for Dumfries CC / Galloway CC. Pick of the West bowlers was Fatima Gardee who bowled 4 overs with 1 maiden, taking 1 wicket for the loss of only 3 runs.

The Ashleigh Building Player of the Match for her performance with both bat and ball was Niamh Muir.

Thanks go to Galloway CC for hosting and for providing an enthusiastic vocal and practical support and to Duncan Muir for umpiring and also providing wisdom and words of encouragement. The next match against West of Scotland CC is away in the first round of the Beyond Boundaries Scottish Cup in August. It will be an interesting clash as both teams can expect to have their regional players back in the side.

Congratulations to Orla Montgomery, and to Jess McCulloch of Galloway CC, from the team on their selections for Scotland U17s Women for matches next Monday and Tuesday at Gala against Cumbria U17s.