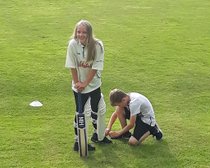 Dumfries 15s travelled with reduced numbers but applied themselves in a competitive performance.

Dumfries Under 15s travelled to Carlisle for the penultimate match of their campaign in the Cumbria Junior League. Due to the holidays, Dumfries had to make do with only 8 players but applied themselves to produce a competitive match albeit in an eventual loss.

Dumfries won the toss and elected to bat. Fergus Bainbridge and Aiden Goodin were the openers and struggled to find the runs against some quality bowling. After two successive wickets, Vaughn Staples and James Hobman came to the crease and managed to build a useful partnership, keeping the game competitive with Vaughn getting 7 and James getting 19.

With Vaughn and James out, Fergus Cubbon and Alistair Little, both on debuts, came to the crease. Fergus struck the ball with intent, continuing the form he has showed with the U13s and scored 16. Alistair scored 9, playing some good shots. This brought Dumfries to 97-7 after 19.5 overs.

Dumfries, led by James Hobman, took to the field full of confidence and raring to get stuck into the Carlisle top order.
Vaughn Staples and Alisdair Little opened the bowling and both produced a good line and length however they were up against quality County Players and a field with lots of gaps due to the low numbers.

P. Gower scored his 30 in the 3rd over retiring not out. Katy Anderson and James Hobman came on to bowl to put a lid on things and managed to take much needed wickets. The confident M Smith fell to James Hobman for 5, K Philips fell to Katy Anderson for 22 and Niamh Muir got C Curry for 12. Then there was a great run out to end the wickets for Dumfries. Carlisle reached the total with 4 wickets down and with 6.4 overs left to spare.

Overall, it was a good performance from the Dumfries youngsters, considering how many players were away, against a Carlisle team which included many County players. Nevertheless, for the U15s, this was a game in which the full strength team would have relished their chances.

Dandeline and Burdock Player of the Match goes to Fergus Cubbon for great batting and a confident performance in the field.