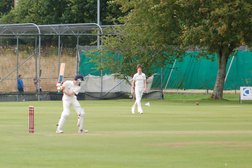 U15s played their last Cumbria league match and rounded off their first season in the league with a win against nearest rivals, Wigton, to secure second place in the league.

Dumfries Under 15s played their last Cumbria league match of 2019 on Monday and rounded off their first season in the league with a win against nearest rivals, Wigton, to secure second place in the league.

Sean Thornely won the toss and elected to bat first on a green wicket. The top order found it difficult to get the scoreboard moving due to the accuracy of the Wigton attack and the loss of early wickets. James Hobman and Vaughn Staples both went cheaply after being caught, Max Corbett-Byers was then bowled for single figures. James Little got himself in though, and hit a solid knock to retire on 30 with four boundaries. This rescued the innings and built enough momentum to help Fergus Bainbridge and Fergus Cubbon to add 7 and 11. In the last overs Sean Thornely added some runs and Aiden Goodin was 4 not out. Dumfries finished on 85 for 5.

The Wigton batters also struggled and wickets fell early on to Luke McBurnie and Vaughn Staples. At one point the score was on 23 for 7 and it looked to be an easy victory after James Hobman came on and the number seven holed out in the covers to a good catch by Sean. However, the visitors rallied and captain George Johnston started to look dangerous, He and Irving put on another 20 runs before he was removed in similar style by Hobman and Thornely. Lloyd continued the charge taking the total within touching distance. They needed 6 off the last over, Lloyd squirted Sean’s first ball for two down to third man, played and missed the next two, then missed the slower straight one to be bowled. 4 off 2 needed. The new bat blocked straight back to the bowler and ran, Sean threw to Luke who removed the bails for a run-out.

The celebration which followed belied the team’s relief! The boys and girls played some outstanding cricket this year and if the school holidays had started at the same time as the English teams rather than earlier, they might have even won the league.

Player of the Match: James Little

PHOTO - James Little was top scorer and Player of the Match

Last league match of the season. Please bring a good tea for two and £2 match fee.