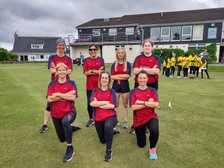 The Dumfries women's side were unbeaten at the first Wee Bash 6-a-side soft ball tournament at Nunholm.

It was an enjoyable morning with some thirty two participants involved in this format to introduce women and girls to the sport.

The Dumfries side, with most of the team making cricket debuts, were pleased to come away as the unbeaten team with three wins out of three. Youngsters Bethan Cubbon and Jasmine McCulloch were instrumental in that contributing match winning performances.

Well done to all the team, Ruth, Clare, Caelainn, Heather, Julie O, Jasmine and Bethan with particularly good catches from Ruth (definitely worth a jug of beer), Clare and Julie O.

Each side played each other once and played three games. Dumfries had three wins, East Kilbride two, Lanercost one, and Uddingston were unlucky being within a few runs of a couple of wins when chasing.

The team play again on Sunday at East Kilbride CC in the next of the West Bash West Series.

If you are interested in trying some women's and girls' cricket at Dumfries Cricket Club at Nunholm this summer for all ages, for juniors, adults the club are looking for new participants. You can get in touch with the club via womenscricket@dumfriescricketclub.com.

Thanks to Reedy, Bevo, and Hugh for their help in organising and umpiring and scoring on Sunday and to the team for organising themselves for playing matches for the first time.

And a thank you to the assistants that came from the other clubs for helping with the umpiring required on the two pitches.