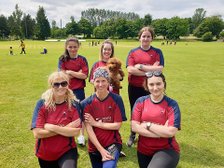 The Dumfries Women's soft ball cricket team was on the road again on Sunday. This time the side was at another Wee Bash tournament which was hosted by Drumpellier Cricket Club in Coatbridge.

They won three games and lost one to East Kilbride with other teams from Uddingston, Clydesdale and the SEMSA Sports Association. Clare picked up a Cricket Scotland Player of the Match trophy by top scoring, plus a six, and a catch. There were plenty of 4s and 6s from Bethan and Orla and in the field Kate fielded well, as did Caelainn wicket-keeping, and Ruth has eschewed crawling to now producing full body slides. There was also good commitment from Caelainn on the day if not quite the same big match preparation on the Saturday evening. And the team was proud of the statistic that they bowled one whole game with no wides.

It was great to see that team mascot Teddy could be in attendance to raise team morale and to urge even more tonking.

The ladies who launch have another Wee Bash tournament scheduled at Gatehouse, Galloway Cricket Club, next Sunday morning. That starts at 11am.

It has changed from being at Uddingston CC to
Drumpellier Cricket Club, 9 Drumpellier Avenue, Coatbridge, ML51JP