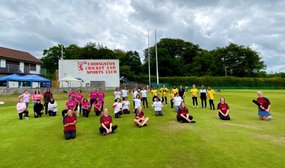 Another Sunday, another Wee Bash soft ball tournament, this time at Uddingston Cricket Club. Despite the earlier start and a breakfast departure our team arrived intact and ready to play and with no apparent travel sickness on the way this time.

A diamond team of Caelainn, Julie O, Bethan, Sue, Jo and club debutante Emily took on fellow Wee Bash regulars Uddingston, East Kilbride, SEMSA Sports Association and Clydesdale. They emerged with a full house of three tournament wins against the first three and enjoyed a post tournament friendly with Clydesdale and with another victory.

Well done to Bethan who was awarded the Wee Bash Tournament Trophy as Player of the Day for her batting, bowling and for good catches taken. The team's catching was sound on a day of all round team effort and good contributions from all. A special mention for newcomer Emily for being up for the day playing with us and for her starring efforts with bat, ball, and in the field. Caelainn was also on a bowling hat-trick after two wickets in two balls. Team mascot Tonker Teddy was dead impressed.

Thanks to Uddingston for hosting.

And thanks to the squad players for accommodating the late change of plans from playing a soft ball Sunday at home to playing away at Uddingston and for enabling everyone to get to play.