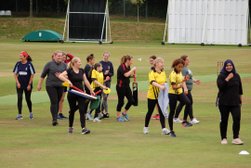 On Sunday the Club held another Wee Bash women's soft ball cricket tournament with teams from Dumfries, Galloway and East Kilbride CC this time for a round-robin series of games.

Dumfries managed to be unbeaten with two wins with Bethan and Emily setting a successful total of 55 against Galloway and then winning a high scoring contest with East Kilbride. Opener Morgan achieved a retiral score of 30 and Clare and then Bethan also hit runs. The bowlers contended with Moon showing how to bat with a succession of sixes and fours in her 30 retired but did manage to keep it to a winning margin of four runs, 62 versus 58.

The players then combined for a final two team game to finish the morning when Pony managed to test the Wee Bash leg bye rules.

Julie picked up the trophy as Dumfries Player of the Day for her bowling efforts on an enjoyable morning and the scorer's Fielder of the Day was Olivia from East Kilbride for two outstanding running catches and excellent ground fielding.

Thanks to the other players from Galloway and East Kilbride for coming to mean eighteen players were involved.

Particular thanks to Mat and John for their help in umpiring and to Ashleigh Building for their Dumfries Women's team sponsorship.

If you are interested in trying some Women and Girls cricket contact us by emailing womenscricket@dumfriescricketclub.com or send us a message on social media @DumfriesCricket .