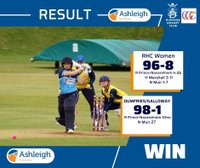 First game Women's Premier League win for the women's side. 4 wickets for Rosh, 3 for Hannah and Niamh hit top of off too. Opening partnership with debut fifty for Rosh and 27 from Niamh.

At Nunholm, the combined Dumfries CC and Galloway CC women's team restricted RH Corstorphine to 96 for 8 in their thirty overs in their opening Women's Premier League fixture. Instrumental in that pressure was Roshini Prince-Navaratnam on debut who came on first change and spun her way to four wickets. Also on debut Hannah Marshall took three wickets and Niamh Muir neatly took out off stump for her wicket.

Prince-Navaratnam and Muir built on their bowling success with an opening partnership against the Edinburgh side. Muir was out caught attempting to hit over the top for 27 but Prince-Navaratnam completed an impressive Ashleigh Building Player of the Match performance by hitting a winning four to reach 53 not out.

Thank you to our Match Sponsor www.ashleighscotland.co.uk